From the most celebrated to the almost unknow teams, from formations of ten planes to others of two aircraft only, from those that have been performing for 75 years to groups which only survived a year, all the Military Aerobatic Teams of the 21st Century are here represented.

Through four hundred photos taken by passionate photographers from all over the world, the one hundred and ten active, temporary, or disbanded teams that have been performing in the new millennium are shown in all their beauty together with their official patch and significant facts on their history and activity.

From Portugal to Chile, passing through the five continents, board on for a world tour on the wings and blades of the coloured, exciting, and professional Military Aerobatic Teams of the World. 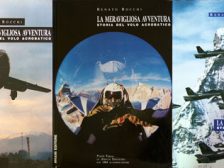